On Friday 4th February, a group of Year 9 students went on a trip to Wembley Stadium 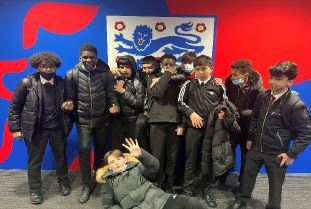 and had a wonderful time! Mr Rance challenged us to improve our behaviour and punctuality to lessons and we were rewarded with a day out for completing the challenge. We were lucky enough to be taken on a tour of the Stadium by one of the tour guides, Jack, and learnt a variety of facts about the history of the stadium and the many sports that are played there.

On the trip, we were able to celebrate our hard work, and achievements together. We left school and walked to West Harrow station to travel to Wembley. When we got there, we saw statues of English Football legends such as Bobby Moore. 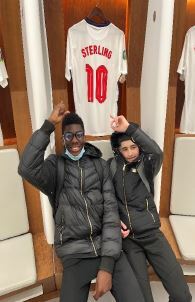 Our tour guide showed us around the whole stadium and we discovered what the stadium was like before – it certainly was not as modern and beautiful as it is now! I did not know that the stadium hosted a wide range of events, from boxing, to singing, to American football and more!

As we entered the stadium, we were able to see (and get pictures with) a replica of the FA Cup – we felt like champions for the day! We also learnt about England winning the World Cup in 1966: they had the cross-bar from the final on display! We got to see the jerseys of famous American football stars, and pretended we were the press taking pictures of the players as they walked in to the stadium.

The best part was when we got to see the Home changing rooms, with the football shirts of all of the Euro 2020 England squad on display. We even took pictures with Raheem Sterling’s and 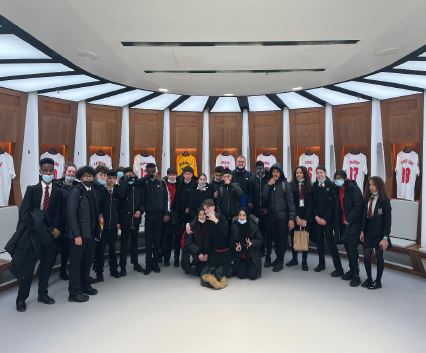 Marcus Rashford’s football shirts. It was really inspiring to see these after learning about their hard work and determination in assemblies from Mr Weldeyesus and Mr Denby this year. We also got to go into the VIP dressing room, and have photos with the football shirts of Cristiano Ronaldo and Lionel Messi: what an epic experience!

Overall, we had a great time as a group with Mr Rance and Ms Hanley. One day, I want to be there myself with my name on the back of a football shirt. Seeing all the amazing things on display at the Stadium gave us all the motivation in the future as we discovered that if you try hard, you can be successful. 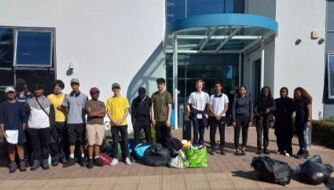