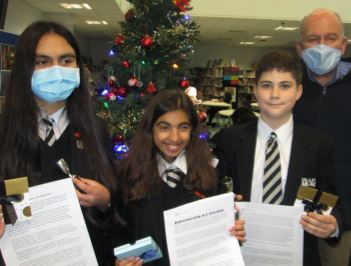 Congratulations to Anahita (8JAW) who won the Library’s Y8 Gothic Writing Competition! To support the English department’s recent gothic work, the Library challenged Year 8 students to come up with a gothic tale more sinister than Frankenstein and more ominous than The Woman in Black.

Anahita impressed our guest judge English teacher Ms Lavery with Bridges at Dusk set in Venice. “It’s a massive honour to win,” said Anahita, who receives a £25 Amazon gift card. Her evocative story used the web of canals in Venice to bring out the horror of her tale. “I went to Italy with my family two years ago and it was very gothic. I loved the bridges and the way that the water changed colour depending on the time of day.” Ms Lavery was very impressed with Anahita’s creativity. “With great style and flair, Anahita’s Bridges at Dusk conjures images of the haunted canals and bridges of a strangely empty Venice. Her intriguing character, Miss Hemmingsworth, the young and tragic heir to her family’s fortune and a grand mansion, wanders the lonely waterways, taking pictures of herself that will be swept away in a terrible inundation. A worthy winner indeed!”

Our two runners up were Sophia (8JAW) who wrote The Twisted Mind, and Michal 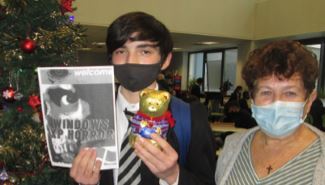 (8HRB). “I’m speechless,” said Sophia. “I was inspired by the gothic lessons I did in English and I liked the stories—The Woman in Black, Frankenstein and Dracula, and especially the character of Miss Haversham from Great Expectations. I thought I could do something similar.”

Michal (8HRB) created The Hidden Shelter and updated the gothic genre with a story set at night during a bombing raid in WW1. “I used a lot of techniques especially ellipsis, because it’s good for dramatic effect and making it more gothic.” And is he pleased that he won? “It made me feel like I’ve accomplished something big.”

The judges were so impressed with Windows XP Horror, written by Igli (8JAW), that they awarded him a Highly Commended prize. His story had a cliffhanger at the end of every page. “This is my favourite story,” said Igli. “And I made a good design. I got my inspiration from thinking of horror movies and scary images.”

We had some fantastic entries from Y8 students and were very impressed with the creativity of our students.  Maha (8SBY) wrote an amazing first line that really drew the reader in: “The leaves turn several different colours and so do the bodies in your friends/neighbour’s basement.” Forests and abandoned houses and menacing creatures were common themes in several stories. Eva-May (8DAL) created a killer look in The Death Stare: Reimagined and portrayed an evil character called Lila, and Eva-May was skilful enough to make the reader also feel sympathy for Lila and her mental turmoil. We enjoyed Shyaam (8AAY)’s characters Ken and Pen who get sucked into a mirror into a fantasy land where a scorpion teaches them how to fight enemies.

Well done to everyone who entered the competition, and our winners, and thank you to Ms Lavery, who enjoyed helping us to judge the entries. “The competition is full of beautifully crafted entries full of terror and suspense that conjure up dark, gothic settings and lonely people in spooky settings. Congratulations to everyone who entered and please keep on writing!”

The Winning Story: Bridges at Dusk by Anahita (8JAW)

Lightning struck the bridge twice, illuminating the clouds of swirling fog within. Overhead, clouds as black as blackbirds rolled ominously across the sky. The twisting maze of canals in the city connected every shadow and every crevice. It was the perfect shelter for the darkness to come, for the darkness that would soon poison the minds of many.

Rain pounded the pavement furiously, the cobbled tiles becoming slippier with every drop. In the mist, in this weather that no real Italian dared venture into, a lonesome figure of a woman held an umbrella above her

head, struggling against the wind. This was Miss Hemmingsworth, the heir to the mansion belonging to the wealthy Hemmingsworth family. Miss Hemmingsworth walked quickly through the Venetian maze of streets, passing deserted squares and looming cathedrals. So far, she thought to herself, it had been a fairly simple trip. It was only the weather that was proving troublesome. But that would quieten down soon. It was Italy after all! The land of heat and sunshine.

The lady soon came to a fork in the alleyways. Which way now? One showed the Rialto Bridge, and the other showed the Canal Passage. Taking her chances, Miss Hemmingsworth slipped on her lace gloves and walked the way to the Rialto Bridge, into the lashing rain at the mercy of the weather. Casting shadows over the rippling canal, the elaborate Rialto Bridge seemed like a shadowy monstrosity. The centuries-old carvings were too intricate for words, but each of them was gloomy in the stormy landscape that had befallen Italy. As the bridge arched over the canal, empty black gondolas, covered in gold engravings, clung to the corners of the old houses next to the bridge.

Miss Hemmingsworth looked up at the bridge. Tentatively and slowly, she climbed the stairs up to the main bridge, before clutching onto the sides of the bridge. She had to take a minute to gather her thoughts. Pausing, she gazed out over the bridge. Her youthful face was lit up by the moon, which was high and full in the black night sky. Her monstrous black umbrella struggled ferociously against the fierce wind, and her hair whipped around her face. Miss Hemmingsworth gathered her skirts up, and bunched them up in one hand. She looked up at the moon and the stars and the darkness and thought, what lies up there?

Spotting many constellations in the hemisphere, Miss Hemmingsworth pulled a little black book out of her pocket and turned the first page, where a map of the stars in the sky lay. She marked the date with a little tick and circled the stars above her on the map. Leafing through the book, she stopped at a blank page and scribbled down the constellations she saw. When she was finished, she gave a little sigh of satisfaction and placed the book back into her pocket.

Resting her slim hands on the rail, the young lady perched herself onto her brown suitcase to sit down, and pulled out a single-use camera. She placed the camera against some carvings and set the timer on. Posing for the lens, she smiled. Snap went the camera. Miss Hemmingsworth smiled to herself, feeling pleased. Taking up her suitcase once more, she let her skirt fall about the floor again, and allowed her hair to uncurl and fall loosely upon her shoulders.

All at once, a change began to invade the young face of Miss Hemmingsworth. If you peered very closely, you would notice that tiny wrinkles had begun to spring up across her face. At first this could pass as a trick of the light—except, as the minutes ticked by, her face began to look older and older. Wrinkles began to crease her face, and her eyes began to hollow, giving her the appearance of an elderly woman. Unaware of all this, Miss Hemmingsworth gazed into the clear rippling water beneath the bridge, blissfully unaware of her disappearing beauty.

The water suddenly shook with an enormous wave. Startled, Miss Hemmingsworth looked closer, and noticed her face. Her heart-wrenching scream echoed for miles around, shrill and high. It pierced the air like a dagger through skin. It sent people rushing to their windows, and peering out like statues.

The lady tried desperately to run back down the steps. An invisible current in the air pushed her back, and she began to hear invisible footsteps. Falling to her knees, clutching her head, Miss Hemmingsworth began to convulse violently. Was she going insane? Slowly, the newly murky water crept up the side of the famed Rialto Bridge. Shadows clouded Miss Hemmingsworth’s vision, who was now sobbing uncontrollably. The water swept dangerously close. She was bound to her spot by chains that she could not even feel nor see.

And then, in one quick, vital movement, the water came up and dragged Miss Hemmingsworth free. She rejoiced, believing she was safe at last. She began to wring out her soiled dress and tattered shoes. But all was not over. A second wave came up, this time as large as a small tsunami. It crashed onto the unfortunate lady and swept her into the sea. She gulped for air, but her airways constricted. The breath she needed to take was travelling further and further away, out of her reach. She gave up. Her stunned body drifted into a dark and shady canal, all while lightning struck the bridge a second time, and the raindrops became as heavy as coal.

Meanwhile, two miles from the haunting bridge, a figure in the very top window of the very top turret in the Hemmingsworth mansion smiled. It chuckled watching the scene unfold. When the body finally drifted away, it clapped its hands and squealed with glee, in a rather childlike way. The figure scampered away from the window, and then reappeared a minute later, holding a torch. It pointed the torch near its face, illuminating the horror…that was its face. 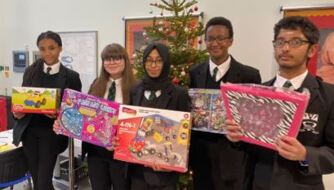 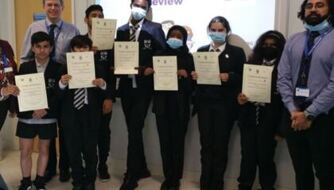